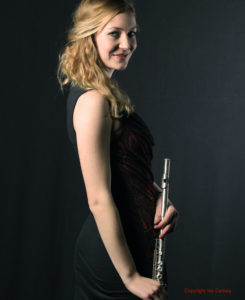 The flutist, singer and pianist Sophie Schollum, born in 1992, is at home in the most diverse styles from pop, soul, funk and jazz to classical music:

With her band “Sanyoo” as well as the solo project “Sanyoo Solo” she interprets her own compositions according to her own lyrics together as singer, flutist and pianist. During the pandemic, she released several songs in solo versions, a first band album will follow this year.

Furthermore she developed a performance in 5 scenes with the title “stAge” with Carmen Pratzner (dance) and Kevan Teherani (percussion, graphics), which was presented in August 2020 within the framework of Musik Aktuell. In the constant alternation between composition and improvisation, as well as between different musical and dance styles and forms, “stAge” deals with the transience of being, in the interplay of visual art, music and dance, electronics and performance. Guest performances are planned throughout Austria (dates here).

With her two friends Anna Magdalena Siakala (Viola) and Theresa Dinkhauser (Clarinets) she founded the Trio “Mister Montelli”, where they take a journey through the music of all times, asking questions and finding new ones through music and sound; Mozart after Neuwirth, Ballads with Minimal Music, Slap Tongue and “Lippen schweigen” and composed works next to improvised sounds (dates here).

Since 2019 she plays in a flamenco music with Monika Clavijo Barroso, Beate Reiermann, Anna Magdalena Siakala and Maria Petrova with the name “Ida Y Vuelta”.

With her father Benno Schollum she interprets Viennese songs and Oldies as a pianist.

As a singer and flutist she performs in cover bands and jazz formations; together with the pianist Gerhard Buchegger she has a Band named “Komm(H)erz”, with which they play at parties and weddings as a duo, quartet oder quintett.

Since 2013 she was a member of the band “Aerdung”, which played original compositions between funk, jazz and pop. In the same year she participated in the first album of the band.

Since 2010 she has played regularly as a flutist in the “Klangvereinigung” Vienna, and since 2014 also in the opera performances of the opera Burg Gars. In the spring of 2017 she was pianist at the Theater am Franz Josefskai 21 in Alexander Wächter’s program “Komik und Noten”.

Sophie Schollum studied instrumental pedagogy for flute at the University of Music and Performing Arts Vienna as well as the teacher training course for music education and instrumental music education with the main subjects flute with Robert Wolf and Birgit Ramsl and piano with Albert Sassmann. She had singing lessons with Ursula Slawicek and Monika Ballwein, among others.